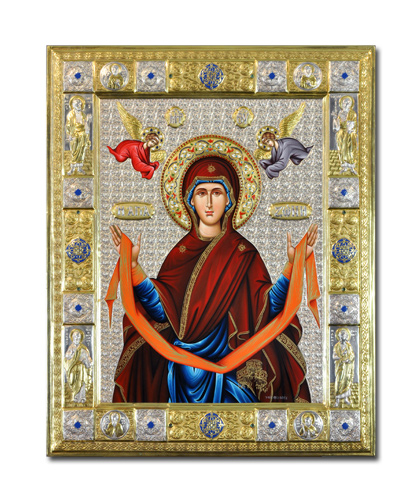 Available Dimensions
Προσδιορισμός μεταβολής τιμής:
Τιμή πώλησης:
Τιμή πώλησης χωρίς ΦΠΑ:
Έκπτωση:
Ποσό ΦΠΑ:
Description The only sacred relic with reference to the life presence of Mary, the Holy Belt, is preserved (partly) in the Holy Monastery of Vatopedi on Mount Athos. The Holy Belt was woven by the Virgin herself using camel hair. After the Dormition of the Mother of the God, the Holy Belt was safely kept with devotion by two women, poor and pious, who used to take care of Mary. The emperor Arcadius (395-408 AD) brought it to Constantinople and kept it in a reliquary that was named “Holy Remains”. The Empress Pulcheria, daughter of Arcadius, built a temple to store the Belt, which was even decorated with a golden thread. Over the years, the Belt was cut in pieces and some of the pieces were transferred to several churches in Constantinople. After the fall, only one piece of the belt arrived at the Holy Monastery of Vatopedi by unknown carriers. According to tradition, John Katakouzinos VI brought it with him in 1354, and after he resigned from his official position he became a monk.