Hand Made Icons
Back to: Handmade icons 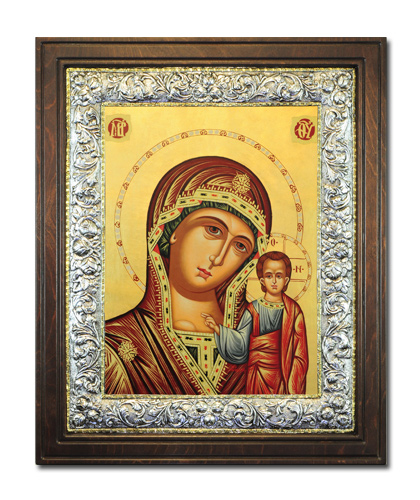 Available Dimensions
Προσδιορισμός μεταβολής τιμής:
Τιμή πώλησης:
Τιμή πώλησης χωρίς ΦΠΑ:
Έκπτωση:
Ποσό ΦΠΑ:
Description An icon-symbol for the Russian Orthodox Church, the Lady of Kazan or Mary of Kazan, also known as the Black Virgin of Kazan, was found in the city of Kazan in Russia by a young girl named Matrona. In order to commemorate the spot where it had been discovered, the Monastery of the Lady of Kazan was built there and the icon was kept in it until 1904, when it was stolen. The loss was considered by the Church of Russia a source of many evils for the country; even the October Revolution was attributed to it. There are more than sixty copies of the certain icon. One of them, a copy painted in 1730, was transferred to the Vatican in 1993 and became a picture of prayer for the Pope John Paul II. Nowadays, the icon is kept in the Church of the Exaltation of the Holy Cross in Kazan. In Greece, copies of the icon are exhibited in the Temple of the Holy Monastery of the Virgin (Keratea), in the chapel of the Russian St. Kseni (Mandra, Attica) and in the Church of the Dormition in Kallithea, Attica.

Silkscreen icon with silver coating, locally gilded, made of aged natural wood; the picture is accompanied by a wooden stand.